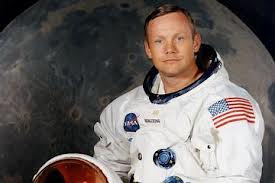 “As commander of the Apollo 11 mission, he became the first person to set foot on the moon, on 20 July 1969, fulfilling the longheld dream of the United States to get there before the Soviet Union. His first words as he stepped on to the surface – “That’s one small step for man, one giant leap for mankind” – instantly became one of the most recognisable phrases ever uttered.”

“For those who may ask what they can do to honor Neil, we have a simple request. Honor his example of service, accomplishment and modesty, and the next time you walk outside on a clear night and see the moon smiling down at you, think of Neil Armstrong and give him a wink.”