Last one was narrowband, this attempt is full colour with the CMOS camera. Also first time using NINA for capture. Looks a great tool.
Replaced image after trying demo of Topaz de-noise – excellent.

Bringing out the all the dusty, dark material leaves me with a horrible background.

New camera testing. Different way of working with Gain and Offset needing to be chosen and probably using more shorter exposures than the CCD.
32Mb lights instead of 10Mb for the CCD means much longer processing in APP. Couldn’t use the flats as I moved the camera between flats and lights.

Imaged areas around this a lot for HOYs but never this actual part. First time back using the MPCC without the LP filter this time to avoid internal reflections. Stars are better at 3 corners but top right still off – probably focuser alignment.

Just Ha possible because of twilight and moonlight

Because sky conditions were very poor I went back to globulars as nebulosity can easily disappear in LP and fog. APP got rid of the massive gradients and LP quite well I think.

Could only fit part in the FOV

Part of the North America nebula – the Central America part – seems to be known as the Cygnus Wall. Can only fit a small part of this object in my FOV.

After doing HOYS-CAPS data on a very murky, moonlit night, decided to try narrowband on this.

Sh2-155 is a diffuse nebula in the constellation Cepheus, within a larger nebula complex containing emission, reflection, and dark nebulosity. It is widely known as the Cave Nebula. Sh2 designation because it’s part of the Sharpless Catalog (1959) of 312 HII regions. About 2400 light years from Earth and a stellar nursery.

Narrowband filters really do cut through the murky, light polluted skies of Edinburgh so well. Obviously false colour, has to be for narrowband, but can’t decide which is the best so two different tone mappings: SII Ha OIII -> RGB and Ha OIII SII

Been meaning to do this one for ages. Not easy because the background gas and dust can be easily lost in the light pollution and noise.

“The Iris Nebula, also known as NGC 7023 and Caldwell 4, is a bright reflection nebula and Caldwell object in the constellation Cepheus. NGC 7023 is actually the cluster within the nebula, LBN 487, and the nebula is lit by a magnitude +6.8 star, SAO 19158.”
Wikipedia

“IC 5146 (also Caldwell 19, Sh 2-125, and the Cocoon Nebula) is a reflection/emission nebula and Caldwell object in the constellation Cygnus. The NGC description refers to IC 5146 as a cluster of 9.5 mag stars involved in a bright and dark nebula.”
Wikipedia

A new one for me

A by-product of doing HOYS-CAPS data for V1490Cyg in Tri-colour R, decided to make a stacked image out of it. 30 subs over 6 months.

At least 4 Herbig-Haro objects imaged in this and marked out in the greyscale version.

“The Pelican is much studied because it has a particularly active mix of star formation and evolving gas clouds. The light from young energetic stars is slowly transforming cold gas to hot and causing an ionization front gradually to advance outward. Particularly dense filaments of cold gas are seen to still remain, and among these are found two jets emitted from the Herbig–Haro object 555. Millions of years from now this nebula might no longer be known as the Pelican, as the balance and placement of stars and gas will leave something that appears completely different.”

“Herbig–Haro (HH) objects are bright patches of nebulosity associated with newborn stars. They are formed when narrow jets of partially ionized gas ejected by said stars collide with nearby clouds of gas and dust at speeds of several hundred kilometers per second. Herbig–Haro objects are ubiquitous in star-forming regions, and several are often seen around a single star, aligned with its rotational axis. Most of them lie within about one parsec (3.26 light-years) of the source, although some have been observed several parsecs away. HH objects are transient phenomena that last around a few tens of thousands of years. They can change visibly over quite short timescales of a few years as they move rapidly away from their parent star into the gas clouds of interstellar space (the interstellar medium or ISM). Hubble Space Telescope observations have revealed the complex evolution of HH objects over the period of a few years, as parts of the nebula fade while others brighten as they collide with the clumpy material of the interstellar medium.”

A by-product of doing HOYS-CAPS data for V1490Cyg in HaRGB, decided to make a colour image out of it even though only 3 subs for each filter.

After gathering HOYS-CAPS data thought I’d give this a quick go in red channel only.

Second attempt at this with the 460EX. 2 nights of data. Meridian flip reduced time.
This is the first time I’ve tried final processing and touch up in Adobe LightRoom.

Cocoon from multiple dates and telescopes

First light with the modded 350D. So much easier to capture and process the nebulosity. 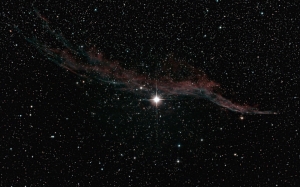 NGC 6995 is the irregularly shaped nebulosity in the left of the image, and NGC 6992 is the curved arc in the right of the image. 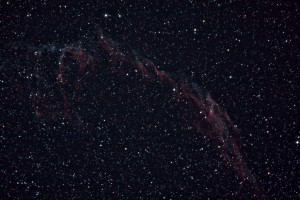