A layer of Ha added on top of RGB to bring out the emission regions in red.

Green channel was very noisy with horrible LP gradients in it so synthesised G from R + B. Still noisy though.

Processed 3 different ways – give different results, not sure which I like best. Still too noisy – need many more exposures.
Interesting edge-on spiral galaxy in Coma Berenices, surprisingly large (14.9′ x 2′) but faint (9.60 but surface brightness 13.3). It is actually intrinsically more luminous than the Andromeda Galaxy. First seen by William Herschel in 1785. Also visible lower right is NGC 4562.

Just a few frames before clouds so a bit grainy.

First supernova for me.

Lots of gradients and stray light from somewhere coming in. Hard to process and as a result have lost the fainter outer arms.

First test of the old 10 inch Newtonian I picked up. Focuser and dovetail were a mess, but with some work it could be good. Optically pretty sound though.

Poor transparency resulting in lots of light pollution and gradients. Also focusing and guiding was not the best.

NGC 3628, also known as the Hamburger Galaxy or Sarah’s Galaxy, is an unbarred spiral galaxy about 35 million light-years away in the constellation Leo. It was discovered by William Herschel in 1784. It has an approximately 300,000 light-years long tidal tail. Along with M65 and M66, NGC 3628 forms the Leo Triplet, a small group of galaxies. Its most conspicuous feature is the broad and obscuring band of dust located along the outer edge of its spiral arms, effectively transecting the galaxy to the view from Earth.

Due to the presence of an x-shaped bulge, visible in multiple wavelengths, it has been argued that NGC 3628 is instead a barred spiral galaxy with the bar seen end-on Simulations have shown that bars often form in disk galaxies during interactions and mergers, and NGC 3628 is known to be interacting with its two large neighbors.

Best clear night for a while. Quite transparent and still.

Terrible trouble with LP, noise and flats. Hard to process out the flaws.

Messier 81 (also known as NGC 3031 or Bode’s Galaxy) is a spiral galaxy about 12 million light-years away in the constellation Ursa Major. Due to its proximity to Earth, large size and active galactic nucleus (which harbors a 70 million M☉ supermassive black hole), Messier 81 has been studied extensively by professional astronomers. The galaxy’s large size and relatively high brightness also make it a popular target for amateur astronomers.

Messier 81 was first discovered by Johann Elert Bode on December 31, 1774. Consequently, the galaxy is sometimes referred to as “Bode’s Galaxy”. In 1779, Pierre Méchain and Charles Messier reidentified Bode’s object, which was subsequently listed in the Messier Catalogue.

Haven’t visited this one for ages. FOV obviously too small to fit the whole galaxy in.
Had to stop after 6 exposures because sky transparency was reducing and dew was becoming an issue.
Dust lanes show up nicely. 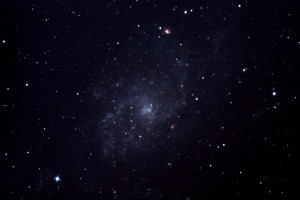 Not the best but a new Messier object imaged.

First attempt at using “T-shirt” flats. Not perfect but better than not using them. 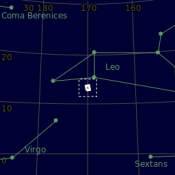 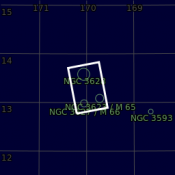